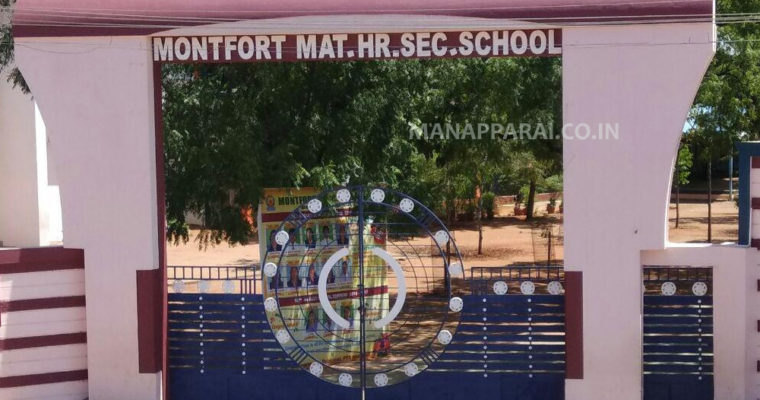 State First on 10th Board Exam 2013
Many Sports & Cultural Awards .

St Louis Grignion de Montfort born on 31st January 1673 in France, from his childhood days was virtues and exhibited an extraordinary love for the poor. He loved and admired the mother of Jesus. He became a priest and worked ceaselessly for God and man.

Education has a very wide connotation. The Montfort Brothers organization, therefore, not only caters to the educational needs of children and youth in normal academic schools but also imparts technical education, education to the deaf, the dumb and the blind, the physically and mentally challenged and engages in village upliftment d social work among the down trodden and the marginalized
Montfortian Education seeks to work for the total development of the young. They are helped to discover their God-given talents and work towards their fullest development in or­der to place them at the service of the society. It seeks to enable the young to search for truth by training them to analyze reality, form critical judgments, search for solutions and work out a synthesis.It is concerned with forming a moral conscience that is capable of discerning what is good and choosing it.It pays attention to the development of the capacity to engage in relationships marked by sincerity and self-determination and training to understand the complex political reality and to enter it in a constructive way.
It imparts an appreciation for the Indian heritage and enables the students to imbibe its culture and ethos for building a harmonious society, irrespective of difference of faith, language, caste and class and at the same time be open to the positive elements of other cultures.
It instills in the pupils the values of love, freedom, forgiveness, honesty and justice.
It takes full cognizance of the fact that education by its very nature requires a community style and environment and cannot allow itself to be isolated from the social context.
Total Education” which implies a holistic approach to education and which is concerned with the total development of an individual as a person, is the quintessence of Montfortian education. It aims at developing the body, mind and spirit to the greatest extent.

St.Louis Grignion de Montfort was born on 31st January 1673 in the small town of ‘Montfort’ in France. Even from his childhood days, he was virtuous and exhibited an extraordinary love for the poor. He loved and admired the Mother of Jesus. He became a priest and worked ceaselessly for God and man. He went about from place to place with the message of god’s love. He taught and served the poor people and championed their cause. His love for the abandoned and the beggars made him rugged, unpolished and tempestuous.

He was a great scholar, a powerful speaker and an author of many spiritual works, such as “The Love of Eternal Wisdom”, “The True Devotion to Mary”, “The Secret of Mary” and “The Secret of the Rosary”. His capacity to paint and carve along with his poetic skills has made him a spiritual Leonardo da Vinci.

He never bothered about the consequences of telling the truth, and doing what was right before the eyes of God. He was victimized by the world for his honesty and conviction. As a result he died at an early age of 43, in 1716, on April 28th. The people and the chursss
ch authorities acclaimed him a Saint. He formed many dedicated groups of men and women to carry on his good work, particularly instructing the young. One such organization is the Montfort Brothers of St. Gabriel. Montfort school and many such educational institutions all over India and abroad are administered by the followers of St. Montfort under the banner of Brothers of St. Gabriel. In the year 2003, this congregation in India celebrated its centenary.